I’ve been trying to get my things together for you all for the last several months.  My last post–about endings and beginnings, helped me, and I hope others get through some difficult times.  Right now in New York it’s cold and windy, and a loving, beloved, beautiful black man, Saheed Vassell, was murdered in his own neighborhood last night by the police in cold blood, shot several times with absolutely no chance to defend himself or be defended by his beloved community.  I often try to put a hopeful spin on tragedy, whether personal or societal, and try to make an argument for why those aspects of life are inseparable; different faces of the same coin.  I don’t have that today.  I just have rage that we live in a society where armed assassins and slave catchers have the full force of the state behind their violence.  Where a freedom fighter and mentor to so many can be denied parole, while white supremacist murderers get support, vigils, and rewards for lynching; and where fifty years to the day after the increasingly radical Martin Luther King, Jr. was assassinated, the struggle for a new society is still a struggle for life or death for black folks in this country. I have rage that we live in a society where the values of a very small number seem to defeat those of the majority, and where people have faced so many decades of abuse feel that it is easier to make concessions to oppression than to humanity.  I have deep sadness for those who have lost their lives and will continue to, and for all of us for feeling trapped in a world we fundamentally don’t believe in. There is no reform for a system based on oppression.  The rampant murder of black folks by the police is not a side effect of the police, it is a primary function.  Those who are not murdered are sent to struggle in prison, destroying entire communities and making way for white gentrification of formerly strong black neighborhoods. The system is abusive, and cannot be reformed.  It can only be deserted. 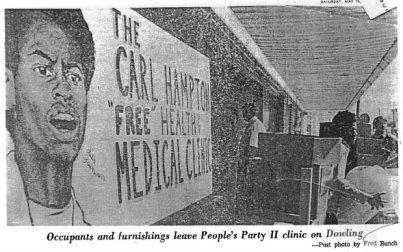 While I might not have a message of positivity, I do have one of deep faith and love.  I am not sure in what way we will win, but I know that every time someone resists the police, immigration authorities, their boss, COs, that is health shining through.  When others join in to support those who are in struggle, the social nature of humanity wins a victory.  And when communities and movements develop around this collective resistance, a deep healing occurs; we get stronger, and the forces of darkness and destruction get weaker.  The gains we have made as a people have been on the backs of those who have rejected the status quo, and who have fought against all odds understanding that for those who are not favored by white supremacist capitalism, survival is synonymous with revolution. These people have mostly been black, brown, indigenous, women, and queers.  They are who we have to thank, and the struggle will continue to be led by those most affected; most ready to claim space as full liberated humans; and prepared to reject ALL forms of oppression, genocide, exploitation, and destruction of humanity and the planet.

I’ll be back in a few weeks with some new announcements.  I am working on building my philosophy into my website, and I will be raising the high end of my sliding scale so I can continue to support those who cannot afford to pay and who need healing as they struggle for global liberation.

Love and strength to everyone fighting for survival.